With the rise of various self-service programmatic ad-buying platforms, brands have become increasingly independent of agencies and their managed services. Today, most online (and some offline) media purchases can be made in-house, at a lower cost, and with greater transparency and control over the purchased media.

What Is an Agency Trading Desk?

The Evolution of Agency Trading Desks

How Does an Agency Trading Desk Work?

What Benefits Do ATDs Offer Advertisers?

Why Are Brands Abandoning ATDs?

What Are the Leading Agency Trading Desk Services Today?

What Is an Agency Trading Desk?

A trading desk is either a piece of technology or a set of services provided by a media agency. The services are connected with planning, buying, managing and optimizing programmatic advertising campaigns. We’ve detailed programmatic ad-buying processes in other articles on our blog – follow this link to catch up.

From an advertiser’s perspective, the main benefit of using an agency trading desk (ATD) is buying media at a lower price compared to managing campaigns in-house. Indeed, ATDs were originally able to offer competitive prices on the media in their portfolio – mainly because they represented many clients and could negotiate better deals with premium publishers. The situation has changed over the years.

Today, many of the key advantages of using Agency Trading Desks are challenged by leading online advertising companies like Google. The traditional agency business model is threatened, but it has also developed in many ways, fleshing out into a fuller service that is comprised of a number of other products and analytics tools on top of what was defined in the original definition of an ATD.

On the surface, the functionalities of an ATD sound similar to those offered by a self-serve demand-side platform (DSP). However, the key difference here is that agency trading desks usually offer some human labor on top of that, which is also what they charge their fees for.

ATDs hire software developers, account managers and data analysts who work for the agency’s advertising clients. Trading desks can use one or more DSPs. Advertisers using the services of an agency trading desk don’t get direct access to the available media inventory.

A DSP, on the other hand, is a piece of advertising technology (AdTech) used by advertisers and agencies to purchase media from publishers via supply-side platforms (SSPs) and ad exchanges. DSPs typically buy impressions from SSPs/ad exchanges via real-time bidding (RTB), either on the open market or by private marketplace (PMP) deals.

The Evolution of Agency Trading Desks

Brands are increasingly demanding more transparency from agencies around fees, commissions and the cost of media. They want the ATD to be an agent working on behalf of the client rather than just a middleman charging some extra fees.

Only some agencies are transparent about what their markup is on the programmatic media they offer. This has led some brands to take their ad planning and buying in-house.

To adapt to the current needs of advertisers, ATDs have become much more advanced and have grown to incorporate functionalities offered by some key AdTech platforms.

The technology used by ATDs today is typically based on proprietary advertising technology, but could also be made up of a licensed AdTech platform, such as DSPs, ad servers, data-management platforms (DMPs) and many others.

The combination of technology platforms allows trading desks to offer their clients a way to sufficiently leverage technology, improve campaign performance and increase the value of digital ad spend.
At the same time, due to client dissatisfaction around transparency, we’re seeing another trend – decentralization of trade-desk services. In order to lower the costs of services and offer their clients higher transparency, some of the major holding companies have decentralized their trading-desk departments by moving their programmatic staff to individual agencies and departments.

An article on Digiday details examples of trading desks that either fully or partly merged with other agencies of the same holding to provide better transparency and consolidation of technology.

How Does an Agency Trading Desk Work?

An ATD sits between the advertiser and the DSP. Unlike DSPs that charge fees to brands and agencies, which then buy inventory from SSPs and ad exchanges, ATDs charge their own fees on top of the cost of DSPs.

Because a large part of ATDs is technology, they operate in a similar way to other AdTech platforms (like DSPs) in that they connect with supply and demand sources (SSPs, ad exchanges, DSPs and ad networks) to purchase media, and also with data providers (DMPs) to target specific audiences.

Some ATDs will purchase media in advance, add a markup and then sell it to their clients at a higher price, whereas others buy media via real-time bidding and take a percentage of the budget.

Agency trading desks provide a range of services for their clients, some of which are not directly connected with buying media:

Reporting and analytics: Many ATDs offer in-depth reports and analysis on both campaign performance and the audiences who viewed and/or clicked on the ads.

What Benefits Do ATDs Offer Advertisers?

Domain expertise: Compared to advertisers working in-house at brands, media buyers at ATDs are likely to be more knowledgeable and experienced in programmatic ad buying.

Lower cost: By offering their services to a bigger number of clients, ATDs can reduce the cost of software, training and operations.

Why Are Brands Abandoning ATDs?

These days, the role of ATDs has diminished, as advertisers buying media can take advantage of programmatic technology on their own, in-house – for example, by integrating self-serve DSPs and white-label DSPs. This is usually cheaper and more transparent. There are no hidden margins on top of the price of the media (trading desks typically charge anywhere between 10–20% of the client’s ad revenue).

A 2014 ANA and Forrester survey revealed that 42% of marketers reported concerns about agency transparency. Among the top concerns were media-buying effectiveness, performance metrics, viewability, ad serving and fees.

In many cases, clients of ATDs were paying excessively with little benefit.

Some of the bigger ATDs were bona-fide tech enterprises that offered services, but many simply outsourced the technology and paid for third-party DSPs. ATDs justify the hefty margins by the risk they have to take when bidding on inventory, sometimes earning less money while charging the brand a fixed rate as set out in the client agreement.

ATDs don’t disclose the actual cost of the media to the client. On the plus side, however, the ATDs assume the risk of earning less or more while delivering the audience or KPIs they are contractually obligated to in the client agreement.

Agency trading desks are quite secretive about their inner workings, and in the early days, they greatly benefited from the fact that many advertisers had little knowledge about programmatic ad-buying processes.

ATDs are known to pool their client data together. This gives them the benefit of scale, but they offer little in return. As a result, some advertisers have little to no control over areas such as:

What Are the Leading Agency Trading Desk Services Today?

ATDs have gone through major changes over the last few years; there have been numerous acquisitions and consolidations. Many leading advertising companies today are running their own trading desks: 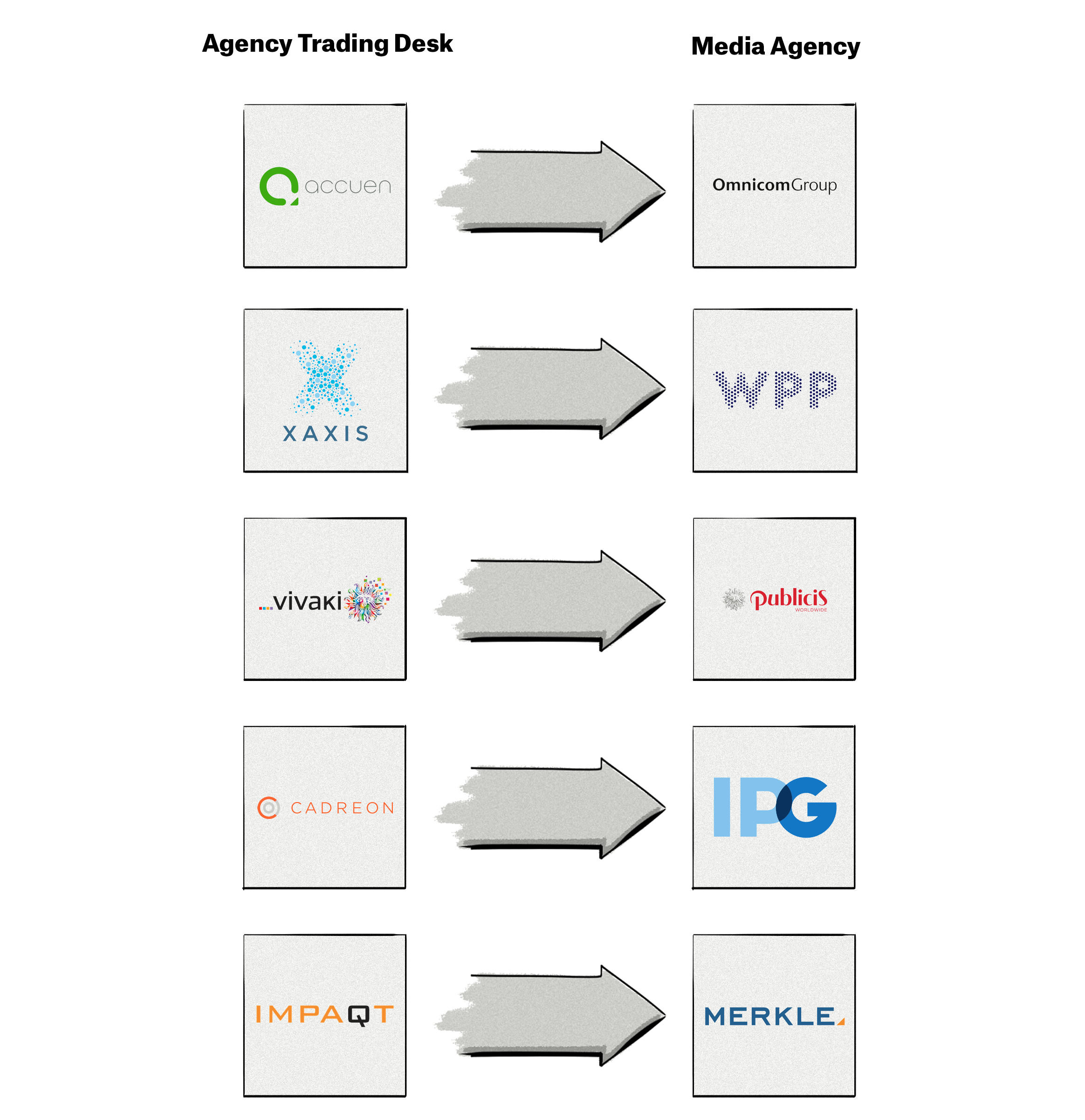 While this doesn’t necessarily spell the end of ATDs, it indicates a need for tighter integration between programmatic processes and brand strategy.

Agency trading desks, just like many other players in the online advertising ecosystem, are facing a number of challenges – brands are taking programmatic in-house and leaving partners that don’t provide adequate levels of transparency and data ownership, as well as the constant competition from the walled gardens of Google and Facebook.

Despite the success many ATDs have experienced, they, like other AdTech players, will need to evolve to meet the demands and needs of today’s advertisers.

A knowledgeable AdTech partner could support your brand in integrating some of the typical functionalities of trade desks in-house, helping to drive better performance of ads and bringing valuable insights from your online campaigns.

Want to build a demand-side platform or expand your existing one?