Advertising technology seems to have a language all its own. Pay-per-click, demand-side platform (DSP), ad exchange — the list goes on and on.

Out of all the jargon, there are two terms that have become real buzzwords in recent years, and understanding them is key to getting a handle on AdTech and, ultimately, reaping its benefits.

The terms programmatic and real-time bidding (RTB) are closely connected and often used together, but the two words are not synonymous. Before we break them down and take a look at their differences, let’s track them back to their origins: media buying.

Media buying, as it applies to digital advertising, is the most powerful and most often-used tool in the repertoire of modern marketers. Without it, how would brands ever reach potential customers?

In the past, advertising relied on a system where agencies had to submit orders, often in writing directly to publishers, and haggle over price, size, and many other details. With the accelerated pace of the Internet and the need for more speed and agility in marketing, this process was begging for improvement.

Before programmatic media-buying, brands negotiated contracts with publishers in person. The whole process was carried out manually, typically with the help of spreadsheets.

Consumers now move from desktop to smartphone to tablet and back again, meandering across various websites, social networks, and mobile apps, so how in the world are advertisers suppose to keep up?


How can they make sure they’re not wasting time (and a whole lot of money) serving ads to people who couldn’t care less? The answer is programmatic.

Simply put, programmatic media-buying is the process of purchasing digital ad space (display ads, banners, video) automatically, with the assistance of dedicated software and algorithms that automate the process.

The image below illustrates how an advertiser can purchase ad space from a publisher programmatically:

There are many different ways in which online media can be purchased programmatically, including:

Programmatic direct works on a one-to-one basis and is similar to the way advertising was purchased in the early days of the Internet, but with the added help of software. With programmatic direct, advertisers and publishers agree on the terms of the media campaign, and then use AdTech platforms to automate the delivery and reporting of the campaigns.

Real-time bidding (RTB) allows advertisers to purchase ad space (aka inventory) on an impression-by-impression basis via auctions on the open market, meaning any advertiser can bid for and purchase ad space on a publisher’s website. See below for more information about how RTB works.

Private marketplace (PMP) is a form of RTB, but instead of being available on the open market, inventory on PMPs is only available to selected advertisers. This type of media buying is usually reserved for premium sites (e.g Forbes and the Wall Street Journal) and large brands (e.g. Coca-Cola and Procter and Gamble).

These automated processes have greatly improved efficiency for buyers and sellers. Its benefits are especially significant given the high level of fragmentation caused by the exploding number of digital channels and potential publishers.

On top of increased efficiency, compared to earlier methods of media buying, what also makes programmatic powerful is data about customer behavior, geography, time of day and many, many other factors that help advertisers quickly target specific audiences with their ad spend.

As mentioned above, RTB is basically an auction in which advertisers bid against each other through an automated platform, such as a demand-side platform (DSP), for space publishers offer on the “open market.”

Based on audience data available to advertisers at the moment of the ad call (or bid request), they can choose where impressions are served in real-time, just as a page loads.

Here’s a brief overview of what the real-time bidding (RTB) media-buying process looks like step by step:

While RTB is estimated to account for over 90% of all programmatic buying and over a third of digital ad spend overall.

Long answer: RTB is just one of the possible programmatic processes in which media can be bought in online advertising. The term programmatic is not very specific on its own – it just implies that the process is automated, and covers a range of media-buying models, including RTB, private marketplace and programmatic direct. While all these processes are used to purchase inventory, each of them is slightly different from the others.

For a more in-depth look at how they work together in the programmatic landscape and what makes them different, head over to a more detailed post on our blog. The differences are nicely illustrated by a chart we have created: 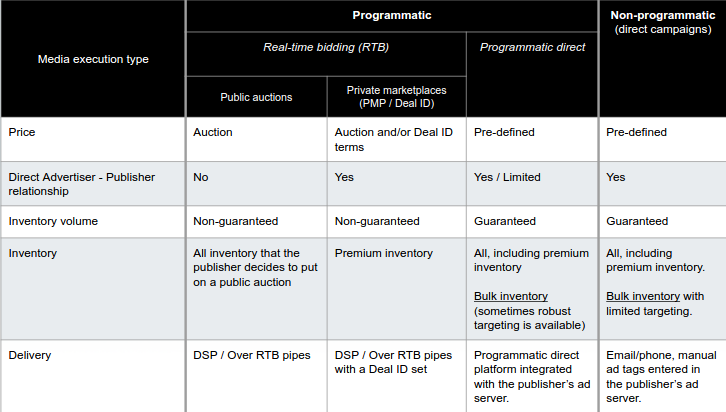 Now that we’ve seen exactly how programmatic and RTB fit together, what does this mean for the future?

Given the rapid developments in AdTech over the last few years and increasing emphasis on efficiency in advertising and marketing spending, programmatic and RTB will continue to grow and expand into new mediums, such as TV and audio.

Build and Improve Your RTB Platform with Ad Tech Specialists

We are a software development company based in the European Union with offices in the USA. Our full-service RTB development team can help you launch and grow your successful platform.

Programmatic Advertising: The Definitive Guide for 2021 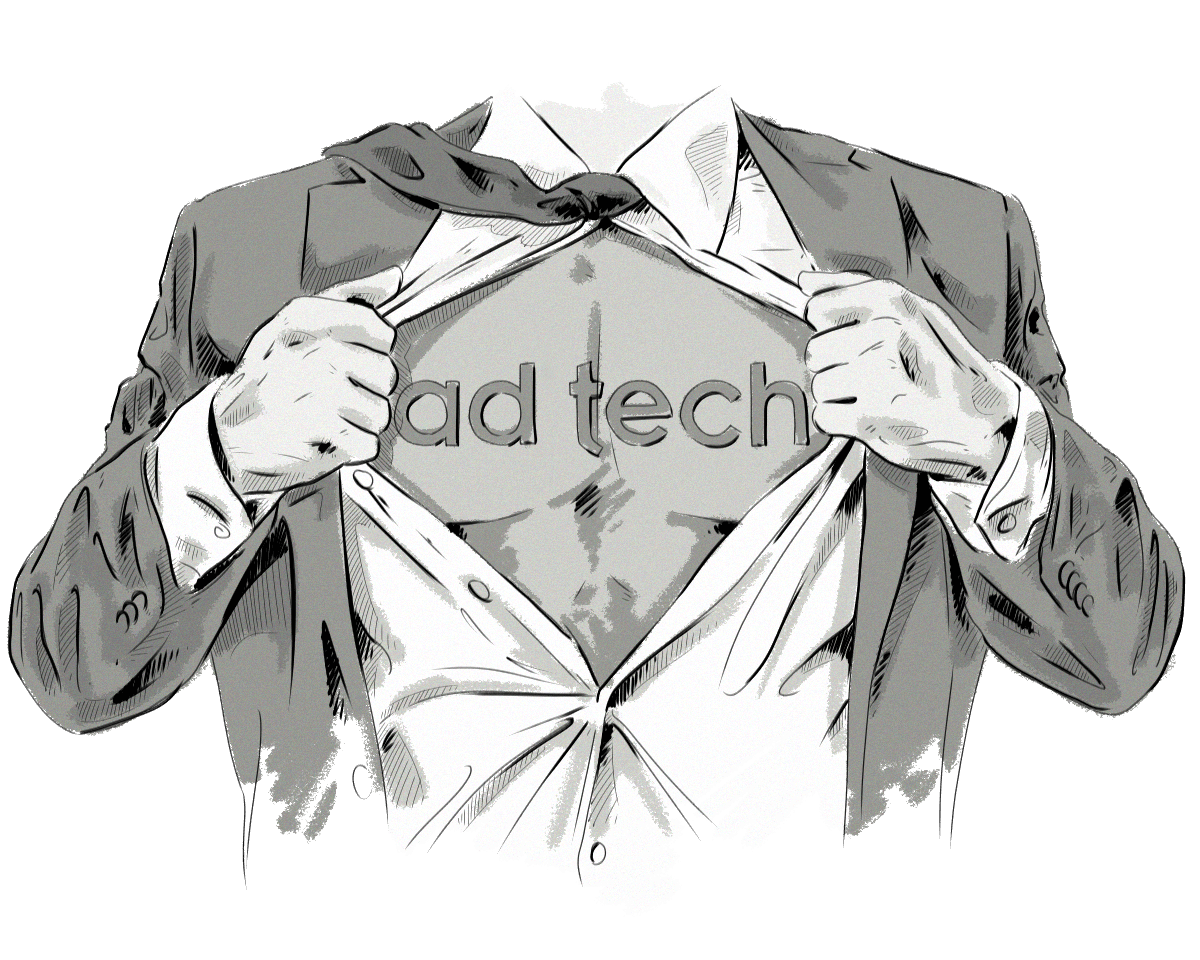 The Ultimate Guide to AdTech Terminology 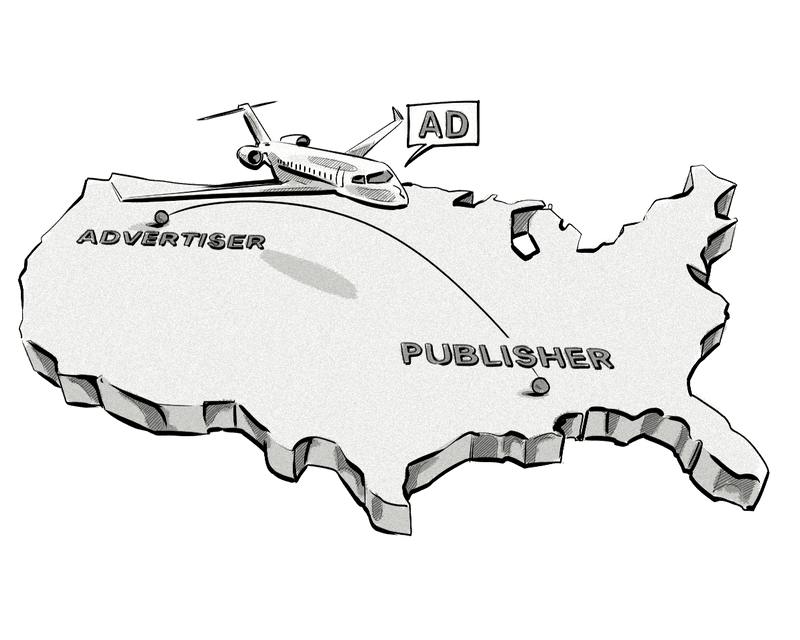 The Top 12 Platforms In The Online Display Advertising Landscape [infographic]

Thousands of C-level executives, software engineers, marketers, and advertisers all learn about the inner workings of AdTech and MarTech with our bimonthly newsletter — and so can you! Subscribe today and get access to the latest and best articles, videos, and guides!